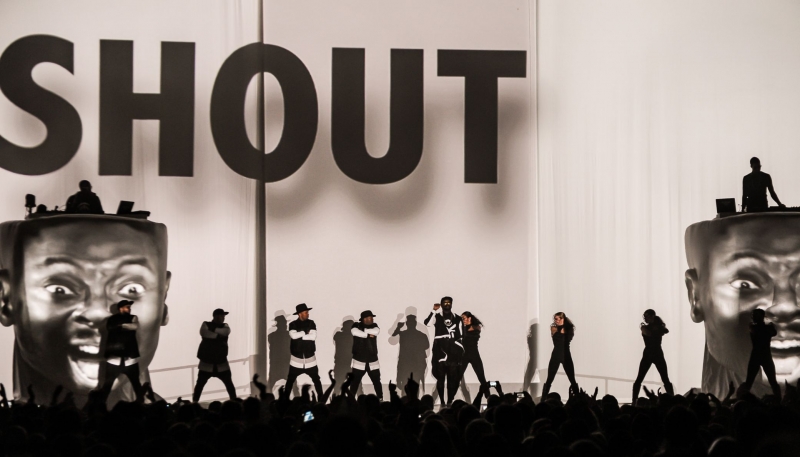 In support of will.i.am’s re-released '#willpower', his fourth studio album, complete with new songs and a host of remixes, the singer undertook a European arena tour taking in 11 shows in 15 days through France, England, Germany and the Netherlands.

With a heavy emphasis on visuals in the form of 3D projection mapping, three giant inflatable heads and Clair Brothers providing an audio system, Production Manager Neil Porter (also the owner of Full Force Productions), realised one of the UK’s most stunning pop productions of 2013. Simon Duff went  to London’s 02 arena to report on the show’s theatrical ‘wow’ factor, which he claims raises the bar for touring projection.

will.i.am has constantly questioned and challenged the notion of pop, technology, and indeed the very nature of corporate life, in all its varying forms. When it comes to touring his vision is equally as strong and exciting. Tasked with over seeing and realising his ideas for the month long tour was Neil Porter, one of the industry’s most respected Production Managers. His clients include Kylie Minogue, Scissor Sisters, Britney Spears and nine NFL Super Bowls to countless high profile fashion and trade shows. Based in Los Angeles he started his career as a carpenter on the 1994 Lollapalooza touring festival before moving to Los Angeles in 1995 working for All Access Staging and Productions and then in 1998 with Merv Griffin Productions.

“This show is all about the visual,” explained Porter, who has been working with will.i.am since early March 2013. “Will was very inspired by James Turrell, the American contemporary artist who works a lot with light and space. We had a meeting with Will a few months ago to discuss his vision. He wanted notions of new space, of bold vibrant colours and silhouette on colour, similar to the early iPod 2002 TV commercials. It all happened very fast.”

The set itself was a collaborative design between Jeff Hall, Paul Normandale, Neil Porter, Jenn Sartory and Nicholas Militello. All of the video content was designed by Nicholas Militello, Ian McDaniel and Pasha Shapiro. The set was built by All Access with just two weeks build time from design to completion prior to rehearsals in Los Angeles. Porter continued: “We’re in nine trucks supplied by EST Transam with a load in time of about five hours which will come down as the tour progresses, and we load out in about two hours. Six busses from Beat the Street carry the 33 strong touring crew.”

After four days of rehearsals in Los Angeles last October, essentials were shipped to Europe prior to two days of rehearsals in France before the first show in front of a sold out crowd at Paris’ Zenith. The lighting design was constructed by Paul Normandale with Glen Johnson as Lighting Director and Charles Woods, Video Director. Lite Alternative supplied lights and rigging, video came from XL Video and lasers via Strictly FX.

TEAM VISUAL
Central to the show is the use of 3D projection mapping and video content. In total around 300 video cues are used for the various stage screens and three DJ head points structures, with an inflatable shape that creates the head shape projection surface. These heads at various points take a lip sync feed showing Will singing. “Will expressly wanted to be lit himself, from the video projection content and not from dedicated lighting points; it works brilliantly,” said LD Johnson. “Everything is about the projection, everyone is twisting to make that work. Even the PA boys were saying ‘OK where do we need to be to help you. It’s team show and everyone is pulling together to break boundaries and create something very original’.”

To that end a total of 12 HD projectors are used to create the projection mapping on stage. Included in the line up are four Barco HDQ-2K40K projectors at the FOH position. A double stack of two Barco HDF-W26Ks are used either side of the stage covering the rear stage wall and a further two set of Barco HDF-W26Ks are set up, stacked, either side half way down the auditorium floor. The camera system is an XL Video three camera PPU with an additional three Sony Robocams. Two pairs of Barco R12+ provide images to the imag screens. FOH playback comes in two parts. A pair of Catalyst media servers provide images to the back wall and headers, while a set of three Coolux Pandora’s Box servers are used for the heads, doing both the video mapping and the playback. Of the 40k Projectors, two cover the front roll drops and portions of the back wall while the other two do the faces of the heads. Of the eight 26k Projectors, a pair covers the left sides of all the heads, another pair the right sides, while the remaining two pairs cover the entire backdrop.

Johnson uses an MA Lighting grandMA2 console for the show. “I trust the desk entirely. We are using time code and from that point of view it is rock solid,” he said. “We take our time code from Eric Harris, who is running Pro Tools from the side of the side of the stage. As soon as the console sees timecode it will automatically fire up that movie file for me, load the Catalyst media sever, put the intensity up and at the end point pull a fader down for me and release all the functions in Catalyst as well.” Each song on the set list has its own hour base time code so the first song starts at one hour the second at two hours and so on. Johnson continued: “It means that if they swap a song around it doesn’t matter. They just fire up that time code. The desk picks it up and fires all the relevant files and does it automatically. Will is a very fluid artist and can make changes in Pro Tools right up to doors and we can deal with those changes very easily and I have back up time code feeds.”